Below is a listing of any projects on which I'm currently working with links to more information. I'm still working on compiling this list, so some projects aren't listed yet. 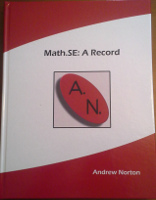 For the past several years, I have been quite active on the StackExchange family of Q&A sites. On their mathematics site, I've answered nearly 450 questions on topics ranging from arithmetic and logic to differential equations and abstract algebra. Although my user profile on StackExchange provides easy access to all of my answers, I thought it would be nice to have a physical copy of my work. Thus, I downloaded all of my answers (and the questions associated with them) and compiled them into a 464-page PDF. I then sent this PDF to be printed in a hardback book by Lulu.com.

For a brief overview of my process, I downloaded all of my question data using the StackExchange Data Explorer. Then, I used a couple of Python scripts to convert the HTML-formatted text into multiple LaTeX files with custom environments. I sorted these files by question tag and sub-topic, then used the "subfiles" package to combine them into a single PDF. I may someday publish the code I used so others may create books of their own StackExchange answers, but it requires considerable cleanup. Thus, for now, I have not uploaded it to GitHub.

I developed and led two robotics-focused sections for the Center for Diversity in Engineering at UVa's Introduction to Engineering camp and the Abemarle High School Summer Scholars STEM Program. The Introduction to Engineering (ITE) camp needed an extended, interdisciplinary engineering design activity that would culminate in a camp-wide competition involving the strength of the design and a verbal presentation by each group. The Summer Scholars STEM Program (SSSP) needed a two-week section that taught engineering design principles through the medium of robotics. I developed a custom lesson plan and schedule for both programs and acted as primary instructor.

In both programs, we used the LEGO Mindstorms NXT kit to build and program robots to participate in a race around a two-foot by four-foot track. Participants learned about navigation strategies, sensor usage, and the tradeoffs between speed and accuracy.

All of the resources used during the ITE camp may be found on GitHub. I intend to polish the current documentation so the camp could be adapted for other audiences.

Two Charlottesville news stations came to the last week of the SSSP to conduct interviews and record video. The stories may be found at these links on the NBC19 and Newsplex websites. I worked with the students exclusively on the LEGO robotics project, not the literature or cardboard chair projects that were also demonstrated. 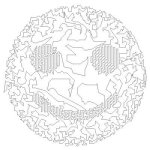 This is (essentially) my final project for CS Theory (CS 3102) at UVa. The goal was to write an approximation for an NP-complete problem; I chose the Travelling Salesman with a particular application to creating "TSP Art". My reasoning was that this project, moreso than others, lent itself to the creation of easily understood diagrams that even my non-technical friends could appreciate.

The most up-to-date description of this project can be found in the README for my tsp-art GitHub repository.